Joining me today in Episode #21 of the EightWheels Across America podcast, from his home in Hoboken, NJ, is Mr. Bill Vila. Bill is a long-time motorcoach operator who has spent most of his driving life in and around New York City, driving everything from black limos to transit buses to motorcoaches. Here is our fascinating conversation about driving in New York City. Listen in … END_OF_DOCUMENT_TOKEN_TO_BE_REPLACED 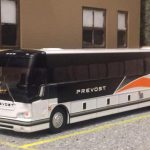 Collecting model buses is a passion for many motorcoach drivers. For Episode #20 I recently had the privilege of talking to one driver, Theodore Campbell from Sumpter, South Carolina, who not only collects and modifies coaches, but also builds sets on which to display and photograph them, not unlike a model railroader, but with buses. Listen in on our phone call. Links … END_OF_DOCUMENT_TOKEN_TO_BE_REPLACED